The historical material in this section of the website has been provided by a number of people and a variety of sources. Information in historical records is always subject to interpretation and the opinions expressed in this section are not, necessarily, those of the Gavinton, Fogo & Polwarth Community Council.

The area was first recorded during the reign of David I of Scotland as the Parish of Langton, with a long village (hence its name), medieval church and Langton tower.  The parish was bought by a local entrepreneur, David Gavin, who demolished all the medieval structures and replaced them with a new house and the planned village of Gavinton.  The village was a successful mix of self-employed tradesmen and employees of the estate, and by 1844, the population of the parish was just over 500.  Most of the buildings in the current Gavinton Conservation area, including the new Langton Parish Church, date from this period of its history.   Gavin’s new estate house was later converted into a magnificent mansion-house, but then abandoned and finally demolished in 1950, although the farm buildings remain. 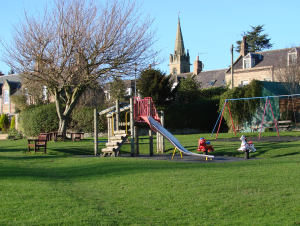 The village of Gavinton, in the parish of Langton, replaced the original Langton settlement. (Some documents record the village as being called ‘Gavintown’ at this time but it is unclear whether this is simply a mistaken hearing of ‘Gavinton’.) In 1759, the laird of the Langton estate, David Gavin, agreed to provide new accommodation for the people of Langton and, it is thought, the move took place in 1760.

Some reports say Gavin wanted to improve the efficiency of his estate in order to increase its agricultural output. Others suggest he simply wanted to rid himself of the sight of the residents so close to the estate house. Either way, given that the Langton settlement has been described as ‘dilapidated’, the move to a purpose built village was probably beneficial.

The original village was built around two straight roads with crossways around an open area intended to become a market. The market never opened, and the area became the village Green.

Around twenty properties were originally built and, in 1795, the population was reported as 150. According to a survey conducted, in 1844, by the minister, Rev David Dunlop, the population of the village had risen to 225, while that of the parish as a whole was just over 500.

Typically, for villages at that time, Gavinton was largely self-contained and self-reliant and the Rev Dunlop noted tradesmen capable of providing for the needs of the area amongst the residents. These included a joiner, slater, blacksmith, hedger, stonemason, grocer, baker and schoolmaster.

Many of the other residents were employed by the estate, though there were a few with their own smallholdings. 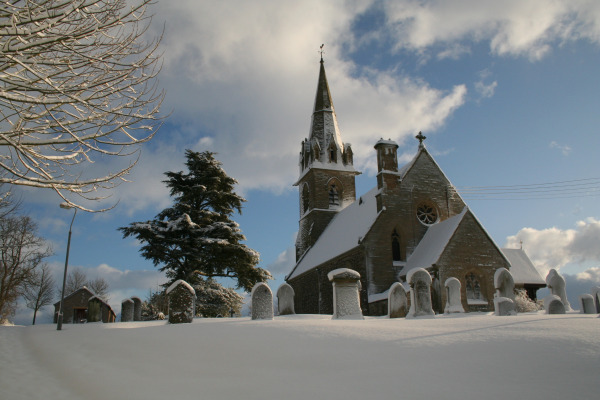 The name, Langton, survives in the parish church. Click here to visit the Langton Church section of this site. In the second half of the 20th century the area to the east of the original village was developed. This increase in the number of properties, to just under 100 in total, could not overcome the decrease in the population per household and the 2001 census recorded Gavinton as having a population of 201. Early in the 21st century, plans have been put forward for a large development to the west which could add up to 45 new properties. As is to be expected, these have proved controversial.

See old maps of Gavinton and the area here, and further information on Gavinton here

A book containing the recollections of older residents in and around Gavinton was published for the Millennium in 1999: “Life at Langton with the Village of Gavinton” by Laurie Cleat and Isobel McLelland.  It contains a fascinating insight into bygone days, and is available from Amazon here

Monday 19th November 1759 was a dark winter’s day at the old Langton House when the Baillies of Langton met with their laird, David Gavin, and a team of lawyers from Duns to sign the deeds that established the new model town of Gavinton. 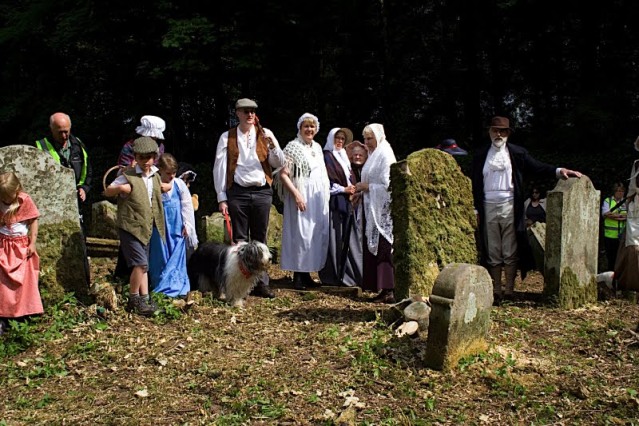 By contrast, it was a warm summer’s afternoon last Saturday (Nov 2009) when the villagers of Gavinton held a walk in eighteenth century clothes to commemorate the 250th anniversary of the move from the old town of Langton to the new town of Gavinton, across the valley of the Langton Burn. The thundershower that looked imminent never happened, as people appeared on Gavinton Green from all over the village, many wearing the kind of clothes that our ancestors in 1759 might have worn. From the Green, some folk walked down to old Langton, and some took the special bus, all gathering at the old Langton Graveyard. A selection of photos taken on the day, can be viewed here.

The graveyard is all that’s left of the old village, but many people in Gavinton didn’t even know it existed. It’s now in the middle of a wood, hidden from view. Up till a month ago, it was completely overgrown with nettles and ivy and a forest of sycamore saplings. But some hard work by volunteers from the village, with the support  of the present owner of the estate, Mr Sandy Brownlie, and a small grant from the Scottish Borders Council, revealed the treasure trove of history beneath. The old church is just a ruin, but the gravestones are absolutely fascinating and a wonderful record of the community’s history. There are stones dated from 1620 up to the last burial there in 1859. 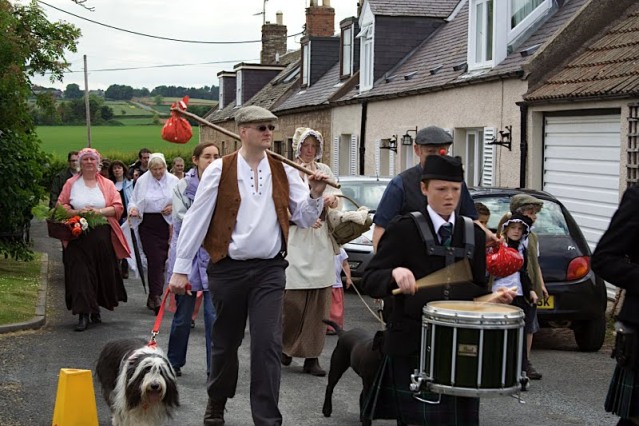 When all had had a good look round, the symbolic walk began – down the old south drive, past the Terrace Lodge, across the Langton Bridge and up the steep hill by the new church, to be led onto Gavinton Green by the Duns Pipe Band. When all were assembled on the Green, Mrs Cilla Wills, of Anton’s Hill, Leitholm, addressed the gathering. Mrs Wills is the grand-daughter of the last Gavin laird of Langton, Lt. Col. T.G.B. Morgan-Grenville-Gavin, and thus provided a direct link with the founder of the village, David Gavin.

An exhibition had been set up in the Village Hall giving an outline of the history of Langton and Gavinton, with many exhibits kindly lent or donated by villagers and by members of the Gavin family. The 1780s plans of the village and estate were kindly lent by Mr Sandy Brownlie. Mrs May Tait of Polwarth Mill was especially generous in providing all sorts of interesting agricultural and rural craft implements from bygone days for display. It seems that David Gavin was not the hard-hearted laird who drove his estate workers out of their homes in Langton that some may have thought he was. The building of Gavinton was just part of Gavin’s process of improving his estate and there seems no doubt that the new settlement was a better place to live than the old one. 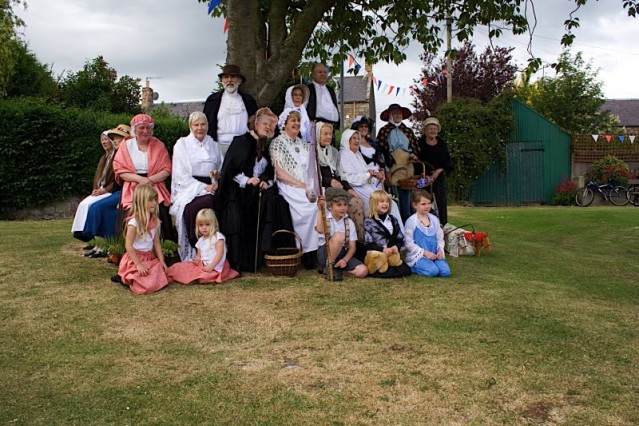 The present residents were very happy to have celebrated the passing of 250 years since their predecessors made the move into their new village.

A large family bible was presented to John Gow, head teacher at Gavinton parish school in May 1871, with this commemorative inscription on the inside front cover 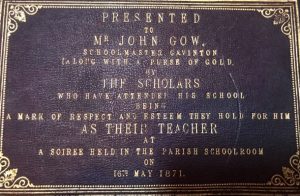 The bible was discovered in the personal effects of a family relation living in Perthshire, who contacted our website.  The Gow family has links to Niel Gow, the renowned fiddler from Little Dunkeld in Perthshire

You can find out more about which cookies we are using or switch them off in settings.

This website uses cookies and gathers some data so that we can provide you with the best user experience possible. Cookie information is stored in your browser and performs functions such as recognising you when you return to our website and helping our team to understand which sections of the website you find most interesting and useful.

You can adjust all of your cookie settings by navigating the tabs on the left hand side.

Limited data is also gathered to help us provide you with some services. You can read our Privacy Policy to understand how we gather, store and use personal data.

Strictly Necessary Cookie should be enabled at all times so that we can save your preferences for cookie settings.

If you disable this cookie, we will not be able to save your preferences. This means that every time you visit this website you will need to enable or disable cookies again.

This website uses Google Analytics to collect anonymous information such as the number of visitors to the site, and the most popular pages.

Please enable Strictly Necessary Cookies first so that we can save your preferences!